Read part one here. It’s time to finish that tarot reading! What we saw, last time, was a nighmarish hellscape of loveless desolation, and the addled young man convinced an alien will save us from ourselves. We already saw that’s our job, and our young man gave up the thing that would have allowed him to help.

We’re getting to the crazy stuff now. The song constantly refers to “the boy” and “he,” but this person is also “Lady Stardust.” Ziggy has succeeded in leaping the binary divide between male and female. That makes him a magician, basically.

I shit you not, here. Here’s the first card where I feel I have to promise you I’m just pulling the cards off the deck here. Place simply describes this card as “poetry, eloquence, song.” Seriously. Ziggy and his muse are one, now.

This is the song I usually remember the least about when I think of the album. That’s sad, because every time I listen to it I like it. Ziggy is claiming that he can change the world here. We also learn a lot about his background, with friends or family who fought and died or starved. The album has already set up what’s wrong with the world. But now we know the cause. We know Ziggy has the capability to actually transform the world, as he says. But he comes from this background of hardship, and so, as the album goes on, he’ll use his powers for his own good instead, because the circuits in his brain keep reminding him of this stuff.

Place says this card is about necessary sacrifice. I’m not actually familiar with the story it’s referring to, but apparently this dog ate the king and this sacrifice is the way to bring the king back? I know the next card shows a phoenix emerging from the same fire, so I can still see the purpose of this card. This card is all about the moment of giving something up. You’ll get something back for it, but here, in this second, you’re just without it. Ziggy sees how he could transform himself. He’s already lost his groundedness. Now he loses his hope in his own mission. He does get to be that rock and roll star. But he can no longer save the world.

Hang On to Yourself

Here’s the band itself, the Spiders from Mars. They tell the listener, and maybe Ziggy, to keep hold of the self. But they also lament doing nothing but having sex. Then they turn around, take the feeling of emptiness, and make more music out of it, since it sounds better that way. It’s now a self-perpetrating cycle.

Place calls this “marching into the desert.” That seems appropriate. The power is there, as the staff still burns. But there’s very little green around the knight. In such an empty place, we have to wonder why he’s all in armor? There’s nothing there that can hurt him. The knight is all about moving and motion. He’s often depicted on a horse or a chariot, something fast and powerful. If you look very closely, you can see the staff is caught in the crossbar of the sword. If this knight takes another step forward, he’s going to trip and fall. This song shows us the result of all the power and sacrifice the album has shown us so far. There’s real power here, but it’s being thrown away in a desert, in a waste land.

Here’s probably my favorite song. It tells the whole story. Ziggy’s incredible on guitar, frustrates people with his fans and his unearthly sexuality. The singer is, again, one of the Spiders from Mars. They ask where they were — but the name refers to the aliens, too. Where are the aliens? Where is the band? They’re in the background. They each gave Ziggy something, but now he’s out there alone again.

Nine of Cups “the Chamois”

Apparently “chamois” is a breed of goat antelope thing. So that very goat antelope thing stands on top of a mound of cups. Here’s that water we were missing earlier! Place says this card is about standing on top of what one has built — experience, in other words. The card seems positive, but the song is really anything but. This one is a little harder to make the connection with. But I think I’ve got something here. Ziggy is at the peak of his powers here. He’s satisfied. Cups don’t really care where the emotion is coming from. Ziggy’s happy, until he gets torn apart anyway. He thinks he has what he wanted, and he believes he’s giving it to everyone else as well. He dug his own grave, and that’s the mound here. He’s standing on the backs of the spiders. And, interestingly, given all the sacrifice imagery, it’s fair to point out that this antelope thing looks like it would go great on an altar, bleeding out before the feast. Because, in the end, that’s what Ziggy is. A sacrifice for humanity’s lust, and also the aliens (if you go by the musical’s plot).

I spent a long time wondering what the hell this song was doing on the album, particularly in this spot. I think, now, it’s an example of what the band is actually playing. Because this song has almost none of the imagery from the other songs. This is kind of an example of what Ziggy’s been offering everyone.

Ace of Wands “The Salamander.” 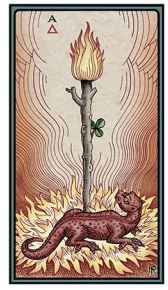 Salamanders live in the fire. Aces are usually beginnings. Weird to see it here, at the end, right? Well, fire, as we saw last time, means the Will or creativity. This is the first song where we actually hear Ziggy’s art. It’s the beginning of his career, so to speak, of the actual product he’s creating and offering to others.

The singer is begging the listener to feel hope and join with him. Ziggy could be either the singer or the listener. Of course, since “the fans” tore him apart a few songs ago, it could be anyone. This song finally offers the message of hope we’ve been promised since the beginning.

Nine of Coins “The Money Tree” 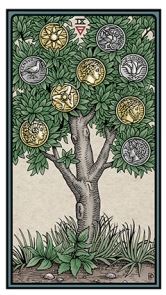 The investment finally pays off. That’s seriously what Place says about this card. This actual album gives us what Ziggy never seemed able to: a feeling of fellowship and siblinghood with humanity. The owl is back, in one of the coins, along with the sun, a flower, and several faces. Love grows, it isn’t teleported from somewhere. The song says the “clock waits so patiently for your song.” Being grounded means, partly, knowing how to wait. Keep watering the plant in hope.

What does this spread say? There’s a representative from every suit this time. There are no major cards at all. Everything’s down here with us, on the level of the elements. Half the spread is about fire, art. The first card is about singing and the voice, the positive aspects of “wind,” the thinking part of us. We see here the ability to make something, with fire and air, that can create happiness and tranquility. The album screeches and howls and ends quietly, with a song about human feeling and connection. It just takes time. I’m reminded of A Clockwork Orange, which is ultimately a novel about how violence is just a part of the psyche of the young. Just wait, and it passes. If you’ve only watched the movie, you should read the book. Kubrick left out the final chapter, which is where the entire message of the book is.

What about the entire reading? Eleven cards is a lot. The only major is the Hanged Man, so the spirit of the album is about being in-between, neither this nor that. We certainly know sex, gender, and death are all defied in the album, so that makes sense. But spiritually we are caught between two impulses — the sharing and the taking feelings. Ziggy wants to share, but he’s grown up with nothing but fear, so he takes more than he shares. That’s not his sin, it’s ours. Patience and sharing will get us over things. Stop trying to move so fast, burn things up so quickly. Don’t sacrifice everything you are in pursuit of what you can do, even if it’s positive. Because if you’re not there at the center of your actions, the actions won’t be as helpful as you think.

As with last time, images come from Robert M. Place’s site. The Alchemical Tarot is really very good If you’re into this kind of thing, check it out.