I’ve been doing a lot of tarot posts recently. I kind of jumped right in, too. So I thought I would write about the possible ways you could use tarot cards, and some of the ideas underlying how I use them and why it makes sense to do music criticism with them.

You can meditate with tarot cards! I already talked about this one, so I thought I’d get it out of the way early. But you can use them in other ways. Say you’re struggling with a real blockage at work or personally. You could lay out a handful of tarot cards in front of you and meditate with them, looking at each in turn, or even surrounding yourself with them. For that, I’d probably suggest The Chariot, an appropriate Knight or two, and maybe one of the trumps between one and five, depending on your job (like, if you take care of people, you could pick the Empress. If you administrate an organization, on the other hand, you could pick the Hierophant).

The images are archetypal, so you can get yourself to respond to them pretty easily just this way. This will have an even better chance of working, of course, if you’ve picked up a deck that really works for you, symbolically and visually. The idea is that you’re making a mental space for yourself to exhibit the traits you feel you need in the situation. The meditation goal is to take into you the traits of the cards. Since they’re archetypal images, we all have those ideas in us to some degree or other. We’ve been a fool sometimes, and a hermit other times.

So you can get each card depending on what you’re looking for. The Chariot, for instance, is about fast, disciplined motion forward. Sometimes, depending on the deck or the interpretation, the discipline can be more or less. I often think of someone practicing their chariot-driving skills, rather than actually going into combat. That could be, in part, because the following card is Strength.

This is, obviously, the one I do a lot here. It’s a little less traditional than daily draws, meditation, or working through a problem. But it’s very useful, as you’ve hopefully seen in my posts here. Basically, you can break down something into constituent parts. Popular music albums are easy — one song, one card! But with narratives, you could deal a card for each character, or for kinds of characters. The more you know about narrative, the more options you have. You could have a card for the plot, or you could have a card for the plot and a card for the story!

If you’re wondering what the difference is, I think I can explain. If I’m remembering correctly from ages ago, the story is what happens in the narrative. Who fights whom, who dies, where people end up, and so on. The plot, technically, is how that’s presented to the reader. So consider my favorite example: The Melancholy of Haruhi Suzumiya. I still insist that the show is good in large part thanks to the way it’s plotted. It doesn’t follow the story; it presents things in a good thematic order, that fills in blanks as new ones open up (it actually irks me that Crunchyroll has Haruhi now and seems to have put the episodes in chronological order. I know the Japanese dvd release did that, but the American release was so good they included bonus disks with the episodes in the order they aired, which is the best way to watch them).

So, anyway. You could have separate cards for what happens in the story and the way those events are presented to us.

Here’s a hypothetical: you just watched a show and you don’t really know how you feel about it. I think that happens to me pretty often. A lot of the time, jumping on here and blogging about it, or talking to students about it in class, often sort of “unlocks” what I’m thinking and feeling. I can put words to it by, well, exploring through putting words to it. What that means is that writing is an exploratory process. Generally we think of it as “explanatory,” which means we explain what we think of something. But it’s also an exploration of what we think. We end up understanding what we think by writing about it, instead of the other way around.

You can use tarot cards to explore those feelings and ideas, too.

We can’t let a post go by without at least a quick reading, right? So let’s try this. I just finished the show Shirobako last week. I really liked it. I sat down to blog about it a day or so later, and just couldn’t really get anything out. So, live (so to speak), I’ll deal out three cards and see what happens. My centering thought is this question: “how do I feel about Shirobako?” 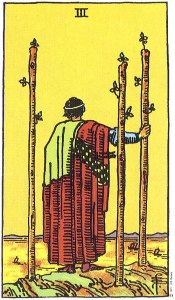 These are Justice, the three of wands, and the four of cups. I think it’s really important that there’s a small progression, from three to four. If you just look at the story that the cards themselves tell, you start with a big, abstract idea — Justice. And justice isn’t just the concept of doing right by people in a courtroom. It’s about being “Just,” or true. Justice carries scales because the word “just” originally meant that a coin was just the right weight. If a coin was just, it would balance in the scale with the appropriate test weight on the other side. So the scales were added to the idea of social justice because things balance out truly.

The cards then go on into the passions and the emotions. Shirobako is very smart, but it doesn’t set out to be smart, if you know what I mean. It’s about, well, passion and emotion. The threes usually signify beginnings and “births.” In the suit of wands, that’s represented by a man watching ships in the bay. People often say they’re his ships, either bringing in profits from a venture or going out to do something else. Basically, the man is beginning something that was planned. He’s in the exciting middle of his adventure, where the planning is over and something else is happening. That’s true of the show, certainly, as most of the main characters are relatively new in the field and really getting into it for the first time.

The fours, on the other hand, usually represent something strong and foundational. Four points make a square, after all. In the cups, that’s not entirely good, as the cups are about motion and flow. So the emotions are a little bottled up here, but strong and able to come out freely when the time is right. That’s why there’s the angelic hand extending the one cup — there’s a chance of new feelings if we stop being so focused on our pre-existing structure (the cups on the ground). Now that definitely has to do with me. I was leery about the show at first, but I gave it a try anyway, and I’m very glad I did.

What is that story, now, from beginning to end? Balancing things in our scales, we find them true; we’re done with the first act and are moving on to something exciting; we can take a chance and find something emotionally wonderful.

That really is my experience with Shirobako. I felt a little sad when it was over, but not like I usually do with shows I love. I think it’s because the show is complete — “just.” I’m getting back into the swing of a lot of things, including watching stuff I want to watch. I’ve seriously spent the past two years mostly watching crap on Netflix because it’s OK to have on while I play a game. And, usually, those games are repetitions of something. I’m not completing new stories or anything, just playing the same randomized stuff over and over. So I’m re-entering that world of new stuff, of things that excite me on their own, rather than as something to pass the time. That’s how I feel about Shirobako. It’s literally about making the things that make me feel that way. And it helped me to access some of the “otaku” ways of thinking that have usually eluded me. Maybe more on that later, though.

Let’s wrap up for now. There are plenty of other things you can do with tarot cards aside from “read your fortune.”

2 thoughts on “Some possible uses for tarot cards”