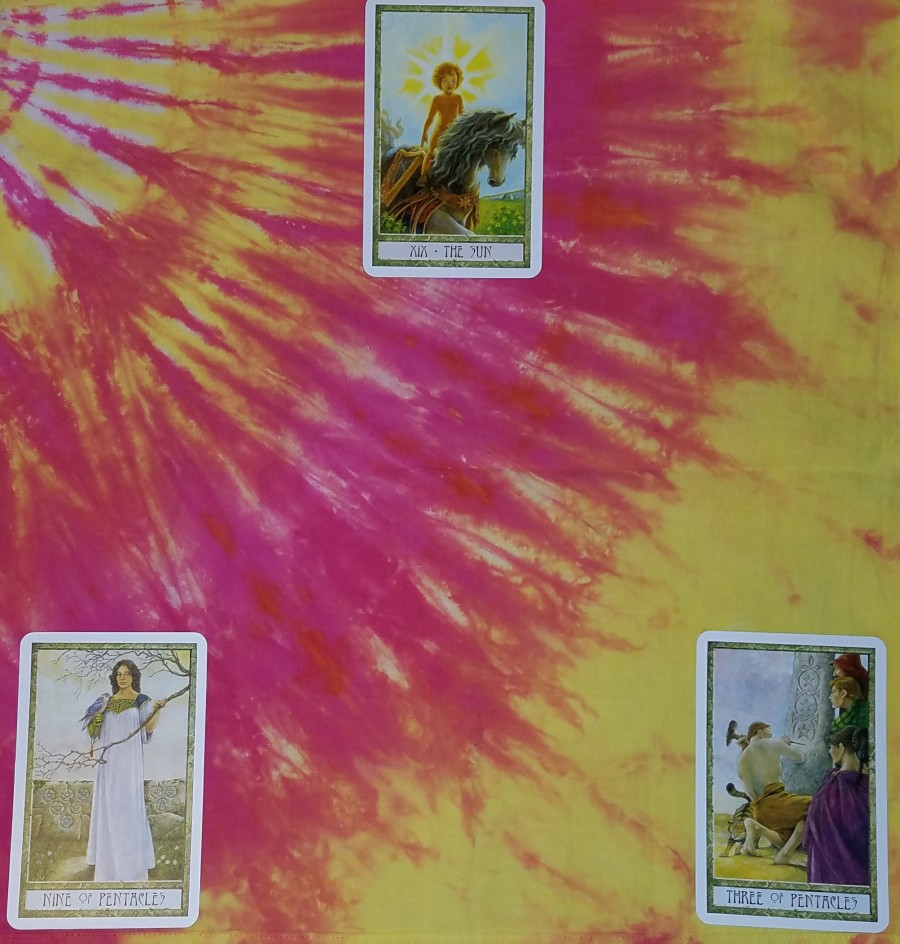 Here’s a tarot spread you may find helpful. It’s for those times when you feel something that just seems a little weird and you don’t know where it’s coming from or why.

Every so often I use a two-card spread for when I feel apparently sourceless feelings, particularly anxiety. I think I got it from Rachel Pollack, but I’m not sure. However, I have had some nights where those two cards don’t quite let me know what I wanted to know, which is what exactly’s going on with me.

This spread is a first draft. It uses three cards, in a simple triangle shape, to triangulate around the feeling itself. That’s what the design started with: there’s a gap in the middle where your feeling is, and the cards indicate those things that surround and contribute to our feelings. Here’s the spread diagram:

I placed my cards going clockwise and beginning at the top, but I think that’s probably something you should experiment with for yourself. The goal of the spread is to find out everything about the spot you’re in right at that moment. However, it’s also a quick spread, so it’s fairly simple.

Every spread needs to tell you what the situation you’re in is, right? If you could diagnose that easily, you wouldn’t necessarily need to turn to a tarot spread to begin with. This is the big picture of where you are now. It is much bigger than the emotion itself, which is why it’s up above the other two positions.

What’s missing or intrusive points to an element in your situation or circumstances that is not ideal. Obviously, it could either be something irritating you or something you don’t have and need. It could be material or something abstract. Maybe, despite your best efforts, you still aren’t over your recent job rejection. Maybe you have a new responsibility at work or a new class that’s just messing with you.

The lines indicate connections, of course, so the spread is actually three diagnoses and three card pairs. It offers a lot of information. For instance, parsing how two cards are connected will hone in on part of the issue.

No spread is complete without a sample, right? I was inspired to work on this spread because I was up late and found myself looking for things to do, despite having lots of things to do. I was bored and a little listless. I also managed to be anxious about those things happening, though it wasn’t too bad. I’m sure many of you have had similar nights, especially if your sleep clock is delayed like mine.

The situation is The Sun, which indicates I’m in a clear spot. I can “see” everything around me — that is, there aren’t really any mysteries or blind spots. I’m also at the beginning of something.

The Three of Pentacles points to a feeling of frustration that work is poking its nose back into my life. No surprise as Memorial Day ends and my new summer work schedule begins, but more than that, my summer is really starting soon, and I’m stuck with more work than usual.

My complication is primarily emotional — the Nine of Pentacles reminds me that I feel hemmed in and trapped by ostensibly good concrete developments.

The line is clear between the last two cards. If I have more work, then obviously I’m hemmed in by “something good” — the monetary rewards are naturally coming at a cost. I’m not used to working a lot during the summer, which has the negative effect of leaving me strapped for cash every August. But it leaves me lots of freedom to really stretch my limbs out again.

The line between The Sun and the Three of Pentacles is harder to figure out. But if I’m at the beginning of something, then the staid, patient work of the artisan can be frustrating.

The line between The Sun and the Nine of Pentacles is clear based on that previous idea: The nine is also about being hemmed in and limited. It’s actually pretty tough on me: there are no real problems at this time messing with me. Everything is fine, but that very lack of terrible news in this time means I’m not sure what to do with myself.

Note here that I’ve primarily used the negative aspects of the pentacles here. The card positions are going to tend toward more negative connotations just because of what they focus on. If you do not invert any of your cards, these positions would be “ill aspected” (to use Waite’s phrase) and summon up the reversal readings.

Something I didn’t do here is to actually position cards on the lines. I think that would develop even more information — the connections could be characterized by a card apiece, explaining how the major positions are linked together. So, instead of performing that linking yourself, you let a card do it. That would lead to a more complicated spread, but also a lot more information.

So what is this feeling in the middle? I happen to be stuck between two situations and have to choose which one to live in (in the very short term). So all the little mundane issues of life just serve as weight to slow me down as I enter into that decision-making process. Yup. That’s about right.

This spread is new (at least, if I’m reinventing someone else’s wheel I’ve just started), so I expect it needs some improvement. I’ll keep working at it. Let me know if you try it out, if you’ve seen something similar, or if you see ways to improve it!